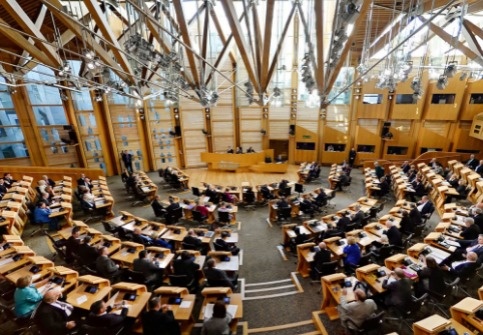 News Politics: Protesters suspended questions from the Prime Minister this afternoon in Scotland after screaming from a gallery of spectators. Terminated the process.

The MSP was barely on their feet when the protesters started speaking. The commotion caught the attention of everyone in the chamber and disrupted the proceedings. Chairman Allison Johnstone announced that she would be put on hold “for a while” while the case was being processed.

SNP’s Stephanie Callaghan was heckled as she questioned yesterday’s Supreme Court ruling that IndyRef2 can only be retained with her Westminster’s consent.

“Any politician who believes in his purpose and believes he can convince others of his purpose will not try to sabotage democracy, but will embrace it.

“So I think we know all there is to know about the Westminster unionists’ view of trying to block Scottish democracy. But she’s not going to win.” “A partnership in which one partner requires the consent of the other to choose his future is not voluntary, or even a partnership. “In the current situation in the UK, England may decide to become independent, but Scotland, Wales and Northern Ireland may not.

“It’s not a partnership, it’s not voluntary, it’s not equal. “But Scottish voices never go silent.

“Scotland’s future is in the hands of the Scottish people and will never be the same.” As Holyrood has a majority of his MSPs pro-independence, the Prime Minister continued:

“Regardless of Westminster’s attempts to thwart democracy, I will always work to make Scotland’s voice heard and Scotland’s future will always be in Scotland’s hands.” She said she was prepared to raise the issue with the British government “at any time”, but “I fully expect the denial of democracy to continue, at least in the short term, as they fear the consequences of democracy.”

How to shop sustainably on Amazon

How to Free Up Storage Space on iPhone

How to Merge Multiple Images to PDF on Windows 11