More
HomeNewsSportsQatar's camels are under stress from World Cup mania

Qatar’s camels are under stress from World Cup mania 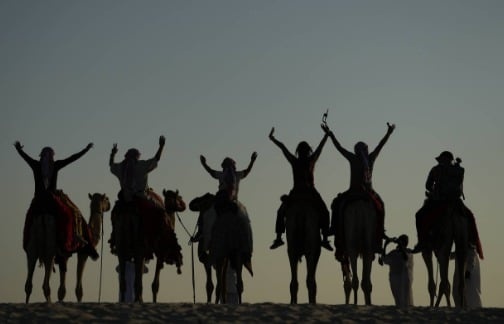 News Sports: Shaheen lay down on the sand and closed her eyes, but the camel had little time to rest. World Cup fans flocking to the desert outside Doha are ready for their perfect Instagram moment: camel riding through the dunes.

On a recent Friday afternoon, hundreds of visitors dressed in football uniforms or covered in flags waited their turn to ride the humpbacks. Camels that do not get up are forced by their owners. As a camel let out a loud growl, an Australian woman shouted: “Looks like they’re being raped!” Nearby, a group of Mexican men in white Qatari robes and hats took a selfie.

As Qatar welcomes more than a million fans for the month-long World Cup, even their camels have to work overtime. Visitors in unprecedented numbers in this tiny emirate are rushing to complete the list of experiences to visit the Gulf in between games: camel rides, falconry photos, and strolls through traditional market lanes. system.

“It’s really a great feeling because you feel so tall,” Juan Gaul, 28, said after the run. The Argentinian fan visited Qatar for a week from Australia.

Like other Gulf cultures, camels provided the Qataris with an important means of transportation and aided in the discovery and development of trade routes. Today, ungulates are part of a cultural pastime: camel racing is a popular sport that takes place on old-fashioned racetracks outside the city.

Al Ali said he knows when an animal is tired, usually if it refuses to get up or sits down again after waking up. He can identify each camel by its facial features. “I am a Bedouin. I come from a Bedouin family that takes care of camels. I grew up in love with them,” Al Ali said.

But the spike in tourist arrivals means less time off between itineraries, he said. A short ride takes only 10 minutes while longer trips take 20-30 minutes. Usually, Al Ali says that a camel can rest after five rides. “Now people are saying we can’t wait…because they have other plans where they need to be out in the middle of the desert,” he said. Since the start of the World Cup, the animals have been taken for walks 15 to 20 times – sometimes even 40 times – without interruption.

Al Ali’s day begins around 4:30 a.m., when he feeds the animals and prepares them for customers. Some tourists arrive at dawn, he says, hoping to get the perfect sunrise shot, “so we have to work with them and take pictures for them.” From noon to 2 p.m., the trainer and camel rest, he said. “Then let’s start preparing for the afternoon battle.”

“I expected something wilder,” said Corigliano. “I was thinking of crossing the desert, but when I got there, I saw a typical tourist spot.” Soon, Corigliano and a group of friends are looking for a buggy in the dunes to race in the desert.

Pablo Corigliano, a 47-year-old real estate agent from Buenos Aires, said he was hoping for something more authentic. The excursion begins in a vast desert at the edge of a highway, not far from the industrial city of Mesaieed and its vast oil refineries. But not all visitors are captivated by the experience.

How to Rename Windows 11

Edit the Color of Windows 11 Taskbar

How to organize apps in folders on iPhone

Use Emoji on Windows keyboard